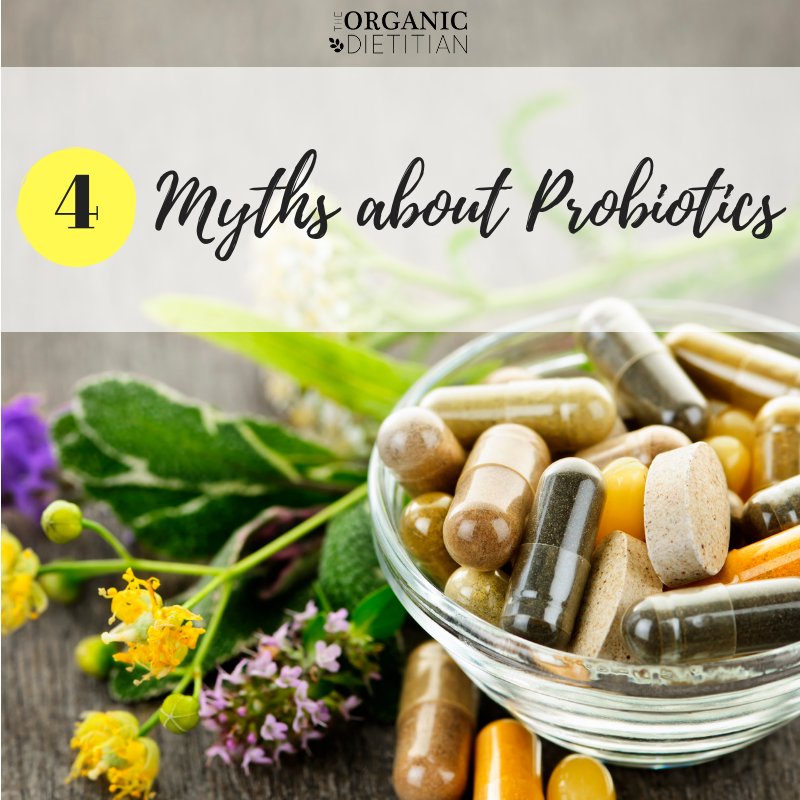 Probiotics have become so popular, there’s certainly no shortage of probiotic supplements being sold in stores.  But do you really know what you are doing when it comes to taking probiotics?  First, you need to understand how probiotics really work.  Now I want to debunk 4 myths about probiotics and how to get the most of of them when you do decide to take one for yourself.

1. My doctor told me I need to start taking probiotics- I’ll just eat yogurt every day then, that should be good enough, right?

Wrong. Well, mostly. Yes, yogurt does in fact contain live bacteria- the bacteria that’s necessary to turn the initial milk product into the final yogurt product. However, this bacteria is typically not useful to human health, as the strains of bacteria used during this process are only useful for turning milk to yogurty goodness, and not so much for improving your gut health.

There are a few yogurts on the market that have actual therapeutic strains of bacteria added however: Nancy’s Organic Probiotic Greek Yogurt, for instance, has added Bifidobacterium lactis Bb12 (plus Lactobacillus Acidophilus La5), which is clinically shown to be useful to treat chronic fatigue syndrome, traveler’s diarrhea, and intestinal dysbiosis, among many other conditions.

However, this is not the “rule” but the exception- the majority of yogurts on the market contain no useful bacteria inside, plus the addition of harmful added sugars and dyes. So overall, eating yogurt is not a good alternative to taking an excellent quality probiotic supplement.

2. I should take my probiotic supplement on an empty stomach to get the best benefit.

It is often times thought that taking a probiotic on an empty stomach should increase the potential of that bacteria surviving past the stomach (and stomach acid) to make their way healthy and happy into the intestine where they belong.

The thought behind this is that no food in the stomach suggests that there would be less stomach acid present too, and less of a possibility for the probiotic bacteria to be killed off before they can actually work to improve your health.

Turns out, this is actually furthest from the truth, as the highest number of bacteria to survive into the colon result from taking the non-enterically coated probiotic 30 minutes prior to or directly with a meal (Tompkins, Mainville, & Arcand, 2011).

Believe it or not, when you take a probiotic supplement with a meal vs. on an empty stomach, the added food helps to buffer the stomach acid, or neutralize it to an extent. Even more interesting, eating a meal that is higher in fat further increases the numbers of bacteria that survive their short stent in the stomach so that more good guys can make it to work in your small and large intestine.

Long story short: don’t take probiotics on an empty stomach. Pop ‘em with a meal, especially those that contain some good fats, to get the best results.

3. I can take any probiotic on the market and it’ll improve my digestion issues.

Take a look at this quick chart showing just how diverse the benefits are for differing probiotic strains, and the importance of taking the right one for you.

Something else often misunderstood by most is that probiotics are also useful for many other chronic conditions not directly related to digestion symptoms. Take a look at these other probiotic super stars:

My main point is- I would never want to take a probiotic that’s been useful to improve constipation if I suffer from severe diarrhea, or one that’s been shown to improve Metabolic Syndrome when I really needed it to help decrease the duration of my Respiratory Tract Infection. Not all probiotics are made equal, and not all strains will be useful to you. Choose your probiotic wisely.

4. I can’t take a probiotic supplement while taking a prescribed antibiotic.

That’s where you’re wrong. An antibiotic is meant to kill bacteria in the body and a probiotic is meant to introduce bacteria into the body. The two shouldn’t seem to mix. But in reality, literature has BUSTED this widely believed myth wide open! With the wide use of antibiotics today come a typically unwelcome guest- antibiotic-induced diarrhea, typically caused by a opportunistic clostridium difficile (c. diff) infection, increasing the potential for death, and hiking health care costs and lengthening hospital stays.

With this being said, a meta-analysis of 63 randomized controlled trials was conducted to look at the effects of taking many different probiotic species with an array of antibiotics, both singularly and in combination with other pharmaceutical antibiotics, and not only found no significant decrease in risk (so the probiotics didn’t mess with the antibiotic’s ability to do it’s thing), but taking probiotics while taking a round of antibiotics has actually been shown to prevent and treat antibiotic-induced diarrhea (Rodgers, Kirley, & Mounsey, 2013). This means that taking a probiotic along with your prescribed antibiotic is actually better for your health than taking the antibiotic alone!

In all, there are so many things we have still yet to learn about the miracle of the gut, and the use and benefit of good quality probiotics. Just do me a few favors on your personal health journey: question everything, do your darn research, and find a practitioner to help you understand what’s really going on in that incredible body of yours.

SCHEDULE A COMPLIMENTARY, NO-OBLIGATION DISCOVERY CALL WITH SARA.  WE’LL USE THIS TIME TO MAKE SURE WE’RE THE RIGHT FIT BEFORE COMMITTING TO WORK TOGETHER.

Apply for a Discovery Call

Master’s of Science in Human Nutrition and Functional Medicine

The post 4 Myths About Probiotics appeared first on The Organic Dietitian.